A week of horror in the Ardennes : an investigation into the war crimes of SCHNELLE GRUPPE KNITTEL - December 1944 : Stavelot, Parfondruy, Renardmont, Ster and Trois-Ponts 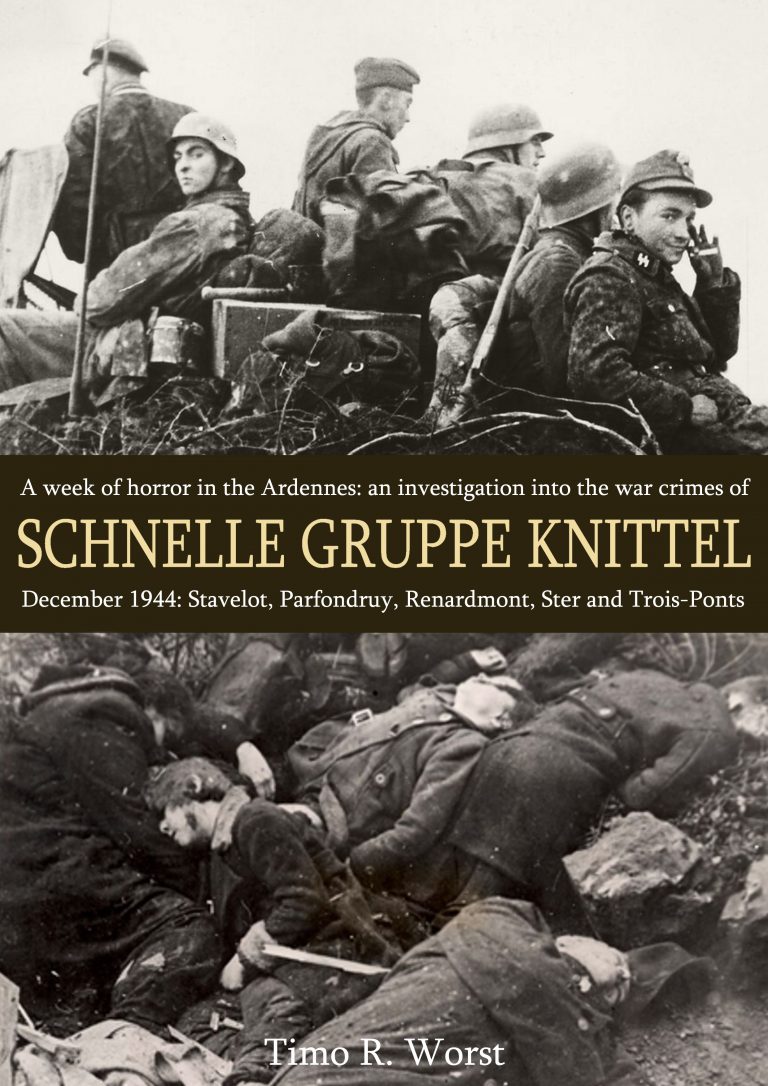 In November 1984, a 60-year-old veteran from Gariboldi, Oregon, U.S.A, wrote a letter to the mayor of Stavelot. In the Second World War, Frank Warnock had been the 1 st Lieutenant in the 117 th Infantry Regiment, 30 th US Infantry Division. On the 22nd of December 1944 he had discovered the remains of twenty-three murdered civilians in the garden of the Legaye-Crismer house. He shared some of his recollections and this resulted in an extensive exchange of letters between him and local historians. In one of these letters Warnock concluded:

“Is there anything in these pages to suggest that haughty, arrogant bestiality is exclusive to the Hitlerite German? Certainly not. It was there long before Hitler and will remain among all races, cultures, colors, religions for a hundred or thousand generations to come. Until sanity comes to the human race. All groups on each of the continents have committed horrors on others or to each other. We have all tried to sweep our own horrors under the rug, but if we dare to peek a little, there they are. Staring back at us. All of us.”

After I had written and published my Gustav Knittel biography, a feeling remained that the victims of the Schnelle Gruppe Knittel had been neglected. I had named them and had described their fate, to the best of my ability with the available sources, but they were still people who only came into view when they were murdered. They had no face, no life, no history for that horrid day in December 1944. I had to try to rectify this and, in fact, the same was true for the perpetrators. I mentioned them in Knittel’s life story, but the lower ranks in particular remained one-dimensional perpetrators. The seed for this new book had been sown.

All the veterans who helped me with my first book have passed away but I could go back to their children, back to the archives, the written memories, fellow researchers and, above all, back to Stavelot. The judicial documents had been embargoed for decades, but now the Belgian archives finally begun to reveal their secrets. And with the help of tireless ‘Sherlock’ Vincianne Boulanger, the new research gained momentum. The last living eyewitnesses were interviewed by her and relatives told her about the victims. Including her own father, Yvon Boulanger, whose grandmother, aunt and nephews were murdered by the SS.

While I finalise the manuscript for this book about a massacre that took place seventy-eight years ago, there is war in Ukraine and reports of new outrages are reaching us. Sadly, we have to conclude that Frank Warnock was right. 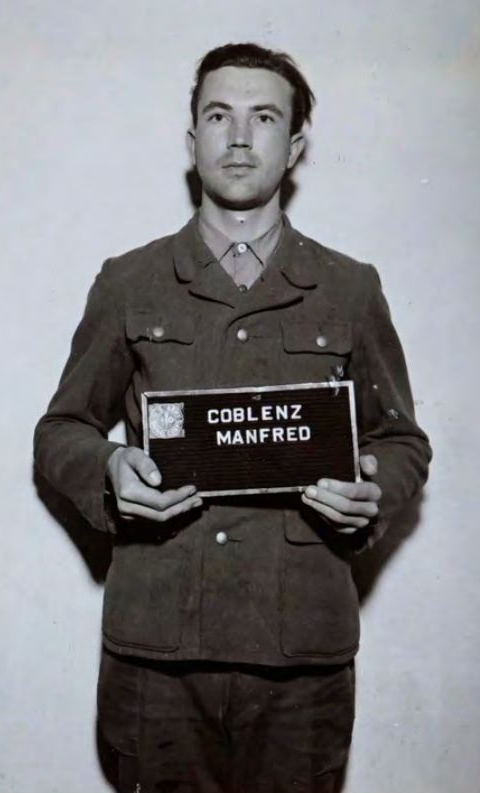 An important and essential work

A very important scholarly work by an accomplished researcher and a perfect and very neccessary accompaniment to “Gustav Knittel”. A sobering account of the horrors suffered by innocent civilians at the hands of SS troops under the command of Gustav Knittel. Not an easy read, dealing as it does with some horrific events, but an essential one. Very, very highly recommended.

+ Illustrated with many rare photos.

The book was great. Well written, well researched, and overall great book. The publishing was incredible. It’s a beautiful book, high quality, one of the nicest book in my library! Thanks to the author and the publisher.

Nothing’s missing, everything is reviewed in detail, it’s all there. The analysis is unbiased for a grim part of WW2 history. The format I find convenient with plenty of photos with hefty captions, most of which never seen before. Hard to let down once you’ve started it. Waffen-ss blood ‘n guts !

Following on for the well received ‘Career, Crimes and Trial of Sturmbannführer Gustav Knittel’, author Timo Worst’s new work focuses on the events that culminated in the murder of innocent civilians by ‘Schelle Gruppe Knittel’ in the scattered hamlets around Stavelot during the Battle of the Bulge. Worst’s use of primary archival documents and privileged interview material from both German veteran’s and the victim’s families ensure that the full picture of this grim week and its aftermath has been forensically pieced together.

The book itself is of superior quality, crammed with original photographs and documents. A must-have addition to any serious scholar’s collection.

'Personalities instead of just names...'

I’m almost afraid to read this book by longtime Internet friend Timo Worst. This focuses very narrowly on a series of atrocities in and around Stavelot, Belgium in which my dad was intimately involved. Succinctly, the German advance through the Ardennes in the Battle of the Bulge involved two German Panzer Armies. The 6th Army was the northern wing with a spearhead (schwerpunkt) of heavy armor led by the famous Joachim Peiper, 1st Waffen SS. The column was cut in half at Stavelot by two companies of my pop’s 1st Battalion, 117th IR, 30th Division. The all-important bridge across the Ambleve at Stavelot was held, keeping supply and reinforcement from reaching Peiper and keeping Peiper from retreating, while ahead of them they were stopped by blown bridges a few miles beyond Stavelot.
This powerful German force was trapped there along this rain swollen river; Panzers, Panthers. King Tigers with almost no gasoline. This was not the Heer, the regular German Army that fought by a certain code of honor, but Waffen SS that had committed many atrocities on the Russian front. Many of these troopers, maybe most of them, really thought this big advance to cut the western allies in half would win the war.
That’s what they were told by the propaganda machine.

Now, two days into the advance they were trapped in the snowy hills of backwater Belgium. Most of them would die there and by the end of the 18th of December they began to realize that. American task forces thrown together from many units began hitting them from the north. The river blocked movement in any other direction. Artillery from all over the region was drawn in to pound them.
In the advance on Stavelot they had massacred 80 American prisoners at Baugnez, near Malmedy. Each of them knew about that even if they weren’t personally involved, and they knew the Americans would be in no mood to take Waffen SS prisoners after that outrage. Many of them simply lost their freaking minds and began retaliating against the only targets that couldn’t shoot back. The Belgian civilians around them. This is that story.
Timo has researched this for many years. He interviewed a number of the surviving SS men, many since deceased. He has interviewed the Belgian families who lost so much, and even surviving witnesses of the killings. Most importantly, he fleshes out these many people that are just names in post-war trial records. Farmers, housewives, children, along with those SS men who come from mundane backgrounds and then inexplicably went on these killing sprees. He makes them personalities instead of just names.
My father was right there. He saw the bodies of children piled in gardens. Ordinary men and women lying dead in snowy fields. I am connected in that way and can only wonder how these events changed him, if he woke in the night with these images in his mind. He never spoke of this.
This will not be something I can read over a few evenings. This is bitter medicine that can only be taken in small sips.
– K. Rogan, USA
July 22, 2022

Meticulously researched and documented analysis of one of the grimmest events of the battle of Stavelot. The author brings you to the heart of the events, his unbiased research work of the actions and characters is emphasized by many photos, many of them adding a face to the victims names. Extremely well documented. Definitely a must read.

This book is by far one of the better written ones regarding an aspect of the Ardennes Offensive (Battle of the Bulge). The author has done a terrific job piecing together the dramatic events as well as gathering information about those responsible for them. Caution: it is a very hard book to read, as it should be. What happened in those dark winter days should never be forgotten. Looking forward to reading more of this author.

COMMUNITY / FORUM
We use cookies on our website to give you the most relevant experience. By clicking “ACCEPT ALL”, you consent to the use of ALL the cookies. However, you may visit "COOKIE SETTINGS" to provide a controlled consent.
COOKIE SETTINGSACCEPT ALL
Manage consent

This website uses cookies to improve your experience while you navigate through the website. Out of these, the cookies that are categorized as necessary are stored on your browser as they are essential for the working of basic functionalities of the website. We also use third-party cookies that help us analyze and understand how you use this website. These cookies will be stored in your browser only with your consent. You also have the option to opt-out of these cookies. But opting out of some of these cookies may affect your browsing experience.
Necessary Always Enabled
Necessary cookies are absolutely essential for the website to function properly. These cookies ensure basic functionalities and security features of the website, anonymously.
Functional
Functional cookies help to perform certain functionalities like sharing the content of the website on social media platforms, collect feedbacks, and other third-party features.
Performance
Performance cookies are used to understand and analyze the key performance indexes of the website which helps in delivering a better user experience for the visitors.
Analytics
Analytical cookies are used to understand how visitors interact with the website. These cookies help provide information on metrics the number of visitors, bounce rate, traffic source, etc.
Advertisement
Advertisement cookies are used to provide visitors with relevant ads and marketing campaigns. These cookies track visitors across websites and collect information to provide customized ads.
Others
Other uncategorized cookies are those that are being analyzed and have not been classified into a category as yet.
SAVE & ACCEPT